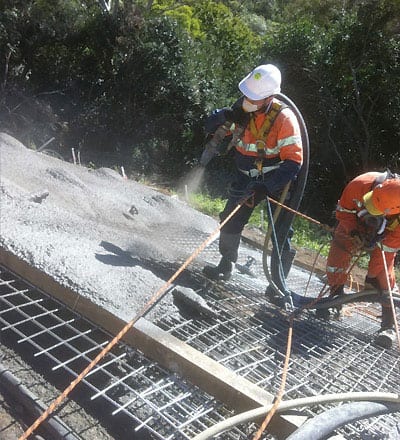 What Is Shotcrete? A Guide To Understanding Shotcrete and How It Works

What Is Shotcrete? A Guide To Understanding Shotcrete and How It Works

Pretty much everyone has heard of concrete before, and will likely see it every day. Whether you’re walking your dog on the footpath, catching the bus to work, or going for a dip in your swimming pool, you’ll see concrete everywhere whether you realise it or not. But what about shotcrete? Even though this technique has been around for over 100 years, it’s still relatively unheard of despite the many common applications it has in today’s construction industry.

Shotcrete, also known as gunite or sprayed concrete, is essentially concrete that is pneumatically sprayed through the nozzle of a hose at high velocity onto a receiving surface. Used as a construction technique, shotcrete is generally reinforced by steel mesh or conventional steel rods, and has many advantages over standard poured concrete.

Due to the force of the nozzle, shotcrete is applied and compacted at the same meaning that it can be used on any type of surface, shape, or form. Common application of shotcrete are for inground swimming pools, retaining walls, drainage, tunnels, water tanks, and slope stabilisation. Any structures that rely on customisation in shape and design can greatly benefit from the use of shotcrete.

Shotcrete, originally referred to as gunite, was invented in the early 20th century by an American taxidermist for the sole aim of repairing the Field Columbian Museum in Chicago. This method involved using a hose with compressed air to blow out dry material, and injecting water through the nozzle as it was released. This is now known as the ‘dry mix’ method, and the inventor, Carl Akeley, patented his idea as the cement gun (being the equipment), and gunite (being the material that was produced). The nozzle is controlled by qualified workers for small jobs (such as swimming pools), but is attached to mechanical arms and remotely operated for larger jobs.

Shotcrete was initially developed using the dry mix method, which involved adding the dry elements of the concrete into a hopper and then spraying it pneumatically through a hose. The person in charge of the nozzle also controls the injection of water through the nozzle, so that when the shotcrete hits the surface, it is completely mixed. As a result, this method requires a skilled nozzleman, particularly when being used on heavily reinforced areas. The amount of water injected at the nozzle can be easily adjusted, enabling better placement in overhead and vertical surfaces without using an accelerator.

On the other hand, wet mix shotcrete involves using ready-mix concrete that is propelled to the surface by compressed air at the nozzle. The wet mix method is now far more common than the dry mix method because it produces less waste, less rebound, and less dust. Given that wet mix shotcrete uses previously prepared concrete, larger volumes can be applied in less time than dry mix shotcrete.

There are many advantages in using shotcrete as opposed to traditional poured concrete, and is therefore regarded as a superior method of concrete application. The primary advantage lies within the process of mixing, transporting, and applying the concrete, which is simpler and quicker than traditional concrete methods.

Shotcrete also requires less water than traditional poured concrete, and has a higher density and lower permeability. When this type of concrete is applied with high velocity, the resulting product has a greater bonding capacity than conventional concrete and has 30% higher compressive strength, making it more durable against cracking and freezing. Other advantages include the ease of application in difficult locations, the speed at which this type of concrete can be applied, significant reductions in the amount of framework required, and lower maintenance needs post application.

Where to Find Shotcrete?

There are numerous companies that offer shotcrete with varying degrees of involvement in the application process. Evolution Shotcrete is one of Australia’s leading providers, given that they also provide Geotechnical and Civil Engineering advice regarding ground improvement, piling, micro piling, soil testing, soil nails, and anchors.

If you’re interested in using shotcrete for your next project, or have any further questions relating to shotcrete in general, give us a call on 07 5561 8885, or visit our website for additional information: http://evolutionshotcrete.com.au